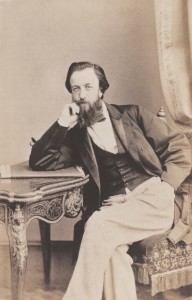 Dr. Christopher Dresser (1834–1904) was a prodigious Victorian designer of applied arts: objects for household use and decoration. He is widely recognized as one of the world’s earliest independent industrial designers. Over a period of nearly forty years, Dresser was connected to many different British manufacturers and created designs in a diverse range of materials.

Dresser was born in Glasgow. In 1847 he entered the Government School of Design in London, where he came under the spell of the outstanding designer and design theorist, Owen Jones (1809–1874). In 1856 Dresser provided a plate for Jones’s seminal The Grammar of Ornament. In 1859 he received a doctorate in botany from Jena University in Thuringia, Germany. Although he did not pursue an academic career in botany for long, lessons drawn from his botanical studies would be profoundly significant to his career as a designer.

Throughout his life, Dresser lectured and published on design. His book, The Art of Decorative Design, was published in 1862, as was Development of Ornamental Art in the International Exhibition, an analysis of good and bad design at that year’s World’s Fair, held in London. Dresser’s book, Japan, Its Architecture, Art, and Art Manufactures (1882) recalls his significant and influential trip to that country in 1876–77. Arguably his most important publication was Principles of Decorative Design, published in 1873.

In 1858 Dresser created designs for Jackson & Graham (c.1840–85), the cabinetmaker that manufactured Owen Jones–designed furniture for its great patron Alfred Morrison (1821–1897). From 1862 Dresser designed for Minton (ceramics), by 1866 for Wedgwood (ceramics), and from the following year for Green and Nephew (glass), and Coalbrookdale (cast iron). With specific regard to manufacturers represented in this catalogue, Dresser’s relationship with Benham & Froud probably began around 1872, with Hukin & Heath in 1877, with Linthorpe and James Dixon in 1879, with Perry in 1883, with Elkington in 1885, with James Couper in 1888, and with Ault in 1890.

In November of 1904 Christopher Dresser traveled on
business to Mulhouse, France. He died during this trip and was buried
in Mulhouse.