The high Victorian Aesthetic movement was a broadly based approach to art, literature and domestic design, and it championed the primacy of aesthetic values over and above any others. The movement rejected the Ruskinian notion that good art and design should tend towards moral improvement, and instead it espoused the idea of ‘art for art’s sake’. Beauty, and only beauty, was the true purpose of art.

In the more pragmatic world of architecture and furniture design, the Aesthetic movement was manifested in the work of Art Furniture designers such as Christopher Dresser (1834–1904) and E.W. Godwin (1833–1886), who emerged from the second wave of the Gothic Revival. They shared the mould-breaking ethos of the Gothic Revival but eschewed the heavy, often excessively ecclesiastical look of Gothic style in favour of something lighter and more forward-looking. Both Dresser and Godwin were captivated by the elegant aesthetics of Japan, a hitherto closed country that only opened up to European trade in the 1860s. 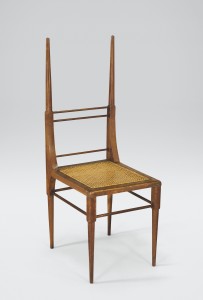 Godwin ultimately produced some of the most progressive furniture of the
Victorian age. Many of his designs became commercially available through associations with mainstream manufacturers, most notably William Watt (1834–1885) of the Art Furniture Warehouse (66). 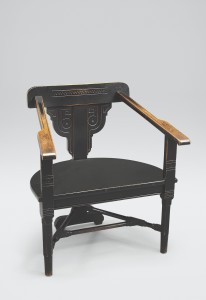 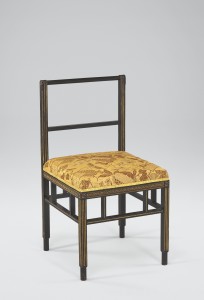 In a similar fashion, in 1880 Dresser established the Art Furniture Alliance to design and produce furniture and other household furnishings. Among his backers was Arthur Lasenby Liberty (1843–1917), founder of the London store that still bears his name. Dresser’s interests extended far beyond furniture to include glass, metalware, textiles and graphic design. His work is among the most distinctive of any Victorian designer (69–70). 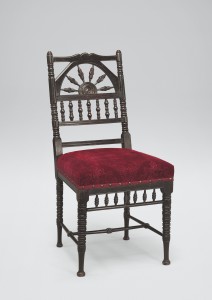 Alfred Waterhouse (1830–1905) is better known as an architect than as a furniture designer. His style was typically part Gothic, part Italian Renaissance and wholly Victorian, best exemplified by the Natural History Museum in London (1872–81), which confirmed his status as the most commercially successful British architect of his age. Like many of his contemporaries, however, Waterhouse also turned his hand to interiors and furnishings (67), and he proved adept at handling the quasi-Gothic, quasi-Japanese style that characterised Art Furniture in the 1870s and 1880s. 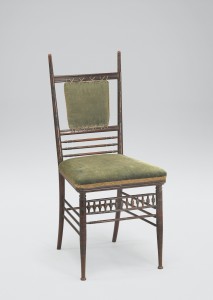 The work of Henry William (H.W.) Batley (1846–1932) is not now as widely known as that of Godwin and Dresser, but he was an important figure in the Art Furniture movement of the 1870s and 1880s (68). He trained under Bruce Talbert (1838–1881), one of the key figures of the ‘second wave’ of Gothic revivalists in the 1860s. His style, which blended Talbert’s Gothic and Godwin’s Japanese, had great commercial appeal. Batley’s chair (68), exhibited at the American World’s Fair in Philadelphia in 1876, had an influence on the prominent American furnishing firm Herter Bros. (1864–1906) and the American Aesthetic movement. As well as furniture, Batley designed wallpapers and textiles and was a talented engraver and printmaker.