Panel-back chairs are the most numerous type of early British chair to survive. Their survival owes much to solid construction—with pegged mortise and tenon joints—and durable materials (chiefly oak). This system of construction, employed by joiners throughout the British Isles, produced predominantly rectilinear forms that were nevertheless capable, through variations in proportion and differences in carved, turned, and inlaid ornament, of almost infinite variety.
In stylistic terms all these chairs, even the earliest, embody the Classical style of
architecture and design that arrived in England at the beginning of the sixteenth century. Chair legs and arm supports are conceived as columns and the frames are decorated with a broad repertoire of lunettes, guilloches, flowerheads, vines, and other foliage, all derived from the new decorative styles emanating from France and Italy. All the chairs in this section are armchairs and are were therefore created as highstatus objects for high-status people. Three (1, 2, 3) have decorated backs recording their original owners. 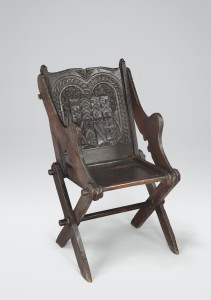 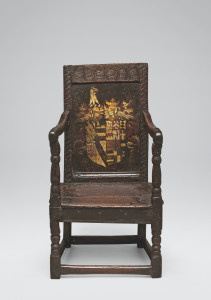 All were members of the provincial gentry; they were not aristocrats but
landowners and businessmen, men of standing in their communities and closely tied by
inheritance and marriage to their localities. Their chairs embody the solid virtues of family, land, and tradition that underpinned British society at this time. Only one, Sir John Arundell (1495–1561), was a national figure. He was a soldier who served Henry VIII in both war and peace, acquiring the soubriquet ‘Tilbury Jack’ while in command of the king’s navy. It is perhaps significant that his chair can be disassembled for travel, and perhaps even for shipboard use. Another owner, Sir Richard Wilbraham of Woodhey (1579–1643), became a victim of the Civil War between king and Parliament (1642–45). After trying unsuccessfully to prevent his hometown of Nantwich in Cheshire from being drawn into the conflict, he was arrested by Royalist forces and died in prison. One chair has iron staples to allow it to be carried, like a sedan chair (4). 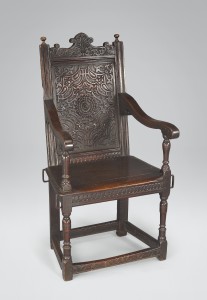 Perhaps its owner became infirm, or perhaps he attained some civic office that entitled him to be carried aloft on the shoulders of his supporters. A well-known engraving by the eighteenthcentury artist William Hogarth (1697–1764), Chairing the Member (1755), shows the newly elected Member of Parliament being carried in such a fashion. 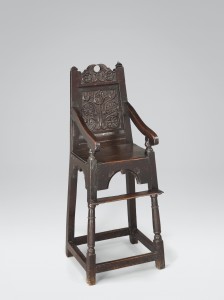 Chairs for well-born children (5) survive in surprising numbers, an indication, perhaps, of the sentimental value attached to such objects, as well as their appeal to modern collectors. The one shown here has the distinctive pyramid finials and profile-cut crest rail of chairs made in North Cheshire and South Lancashire.