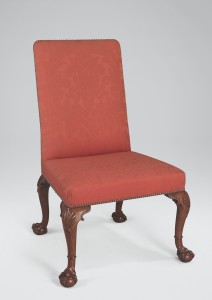 This chair is one of a pair, from an original set of 18, Made in 1735 by William Hallett for the 6th Viscount Lord Irwin, whose portrait is below. 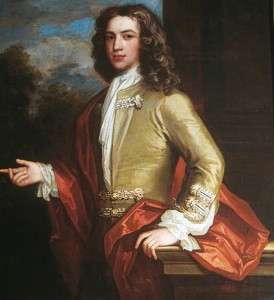 The chairs were originally made for Irwin’s London residence, but they were moved to his ancestral home, Temple Newsam, just a year later when Lord Irwin died. The connection between the original bills for Hallett’s work and the upholstery of these chairs was made by the late Christopher Gilbert, and the survival of the documents makes these chairs the earliest recorded example of William Hallett’s work.

William Hallett was a self-made man who hailed from Somerset. He married well enough to build himself a country house in about 1750, on the site of Cannons, the former Middlesex seat of the first Duke of Chandos.

In the early 1750s Hallett commissioned a portrait of himself (holding a plan of his house) and his family, to be painted by Francis Hayman (RA 1708-1776). 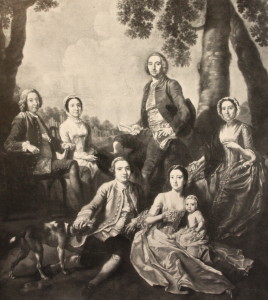 This painting signals Hallett’s success at gentrifying himself, and may be the only eighteenth-century portrait of a cabinet-maker which can be identified with absolute certainty.

Hallett lived until 1781 but retired from furniture making in the mid 1750s. His grandson, also called William Hallett (b.1764 and raised by his grandfather), continued to live in comfortable prosperity and he commissioned Gainsborough to paint a portrait of himself and his future wife Elizabeth in ‘The Morning Walk’, see below. 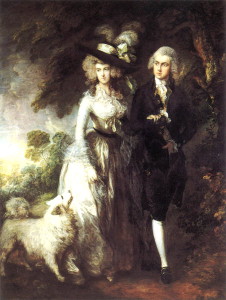 The bills for the set of 18 chairs and all their upholstery are in the Temple Newsam papers, which are held in Leeds City Archive. 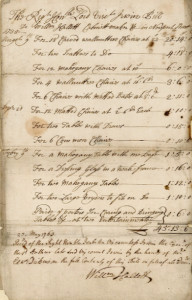 The first line of this bill details the ’18 Walnuttree chairs’,

and it is signed at the bottom by William Hallett.

A further bill details the upholstery of the chairs, see below: 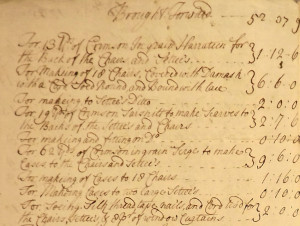 This upholstery bill was transcribed by Christopher Gilbert as follows:

‘for girtwebb, Sacking and Canvas used for 18 chairs and two Settee’s and tow make the Rowels

For 95 Pd. of Curled hair for the Do. Chairs and Settee’s

For Making of 18 Chairs, covered with Damask with a Cord Soed Round, and Bound with lace

For making to Sette’s Ditto

For 19 Yds. Crimson Sarsnitt to make Scarves to the Backs of the Settee’s and Chairs

For making and fitting on Do.

For 62 Yds. of Crimson in grain Serge to make Cases to the Chairs and Settee’s

For making of Cases to 18 chairs

One of the ’18 walnutree chairs’ of this set, which is still at Temple Newsam, has been re-upholstered according to the instructions of the upholstery bill.

By making reference to other surviving examples of this chair type, the bill has been interpreted into upholstery, which is shown on the Temple Newsam chair below.

A binding of ribbon lace runs around the base of the seat and up over its corners. 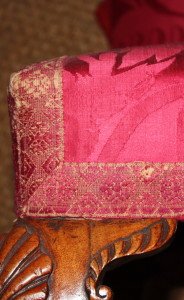 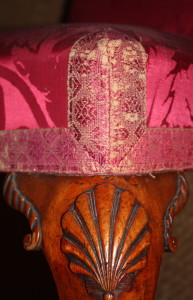 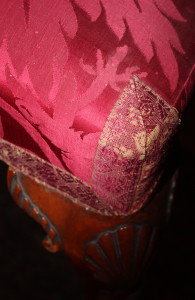 ‘Scarves’ of ‘Crimson Sarsnitt’ are sown into the upholstery and can either hang loose down the back of the chair or be thrown over the front to protect the cover from dirt, grease, or overly liberal applications of hair/wig powder. 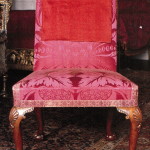 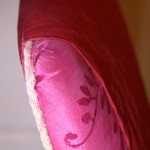 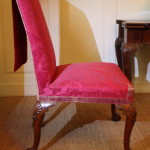