Charles Francis Annesley (C.F.A.) Voysey (1857–1941) trained as an architect in the office of J.P. Seddon (1827–1906) before setting up an independent practice in 1882. His work reveals a mixture of influences, but he acknowledged that his biggest debt was to A.W.N. Pugin (1812-1852). Voysey echoed J.D. Sedding (1838–1891) in being a great admirer of Pugin. In a lecture delivered in 1888, Sedding wrote: ‘We should have had no Morris, no Street, no Burges, no Webb, no Bodley, no Rossetti, no Burne-Jones, no Crane, but for Pugin’.
Voysey’s association with Pugin might seem surprising, for there is little that is overtly Gothic in Voysey’s work, but like Pugin he believed deeply in the spiritual value of good design. In The British Architect in 1910, Voysey is quoted as saying: ‘Cold vegetables are less harmful than ugly dish covers. One affects the body and the other affects the soul’. Voysey also followed Pugin in designing every detail of a commission himself, from buildings to
door handles. 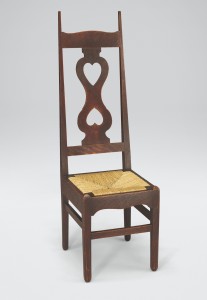 Voysey’s furniture has much in common with the spirit of contemporary Arts and Crafts design, but can also be seen as leading towards modernism. His design has a thoroughly uncluttered, modern look. Voysey wrote in The Journal of Decorative Art in 1895, ‘Simplicity in decoration is one of the most essential qualities without which no true richness is possible’. Simplicity, however, masked a very subtle approach, one of whose characteristics was the combination of straight and curved elements with gentle tapers and changes in section, features also found in the work of Charles Rennie Mackintosh (1868– 1928) and Arthur Heygate Mackmurdo (1851–1942), an early friend. Voysey’s combination of flat surfaces with sparing use of decorative detail was equally influential. 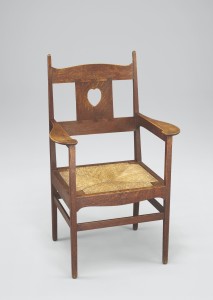 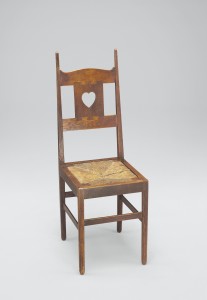 However, unlike Mackintosh, Voysey was very much concerned with the raw materials and craftsmanship of his furniture. The great majority of his furniture was made in oak, and most of his designs were executed by a handful of trusted furniture-makers. Apart from a select group of private houses, Voysey’s biggest commission was to design and furnish the offices of the Essex and Suffolk Equitable Insurance Company between 1906 and 1910. 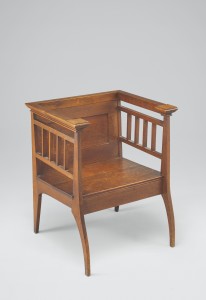 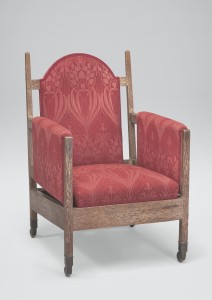 Voysey’s rather remote personality meant that, unlike William Morris (1834-1896), for instance, he did not acquire a large band of followers and admirers. An exception was Arthur Simpson of Kendal (1857–1952), a  urniture-maker to whom Voysey entrusted many of his commissions. However, Voysey had many admirers in Continental Europe; his wallpaper was admired by the Belgian Art Nouveau architect Victor Horta (1861–1947). In the later twentieth century, Voysey’s work – in furniture, textiles, paper and metal – gained increasing recognition among collectors and in museums.

Voysey’s son, Charles Cowles Voysey (1889–1981), was also an architect and, through his later partnership with John Brandon-Jones (1908–1999), much of Voysey’s memory lived on and much of his archive was preserved to the benefit of recent scholarship.