The firm of Morris, Marshall, Faulkner & Co. was founded in April 1861 and soon became more generally known as Morris & Co. (1875–1940). As well as William Morris (1834–1896) himself, its founding members included the architect Philip Speakman Webb (1831–1915) and the Pre-Raphaelite artists Ford Madox Brown (1821–1893), Dante Gabriel Rossetti (1828–1882) and Edward Coley Burne-Jones (1833–1898). This remarkable array of talent aimed to revolutionise the design, decoration and furnishing of British houses. These artists were fired not only by a powerful disillusionment with mainstream Victorian design, but also by a fervent belief in the value of traditional craft skills and materials. Morris himself went further still, maintaining that a revolution in art and design would lead ultimately to ‘the bettering of all mankind’. Belief in political and social change was frequently an element that informed later nineteenth-century British design.

Morris & Co.’s designers looked both backward and forward. They desired change, but the direction of that change was to be determined by taking what was best from the past and applying it in the present. In terms of furniture design, this meant an emphasis on simplicity of form, truth to materials, fitness of purpose, and absence of sham. For example, the firm rejected the use of veneers until after 1890.

In an 1880 lecture, the firm’s philosophy was summed up in Morris’s exhortation to ‘Have nothing in your houses that you do not know to be useful or believe to be beautiful’. It also entailed an element of romantic medievalism that, to its critics, was mawkish and sentimental.

The firm’s first major public exhibition, at the Mediaeval Court of the International Exhibition of 1862, was not an unqualified success. Some critics regarded its furniture as crude and backward looking – in fact, the Building News in August of that year thought it was fit only ‘to furnish a barn’. Moreover, it was not cheap, and consequently the firm’s clients were not the working men and women whose virtues Morris extolled, but rich lawyers, bankers and industrialists. 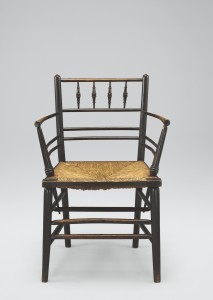 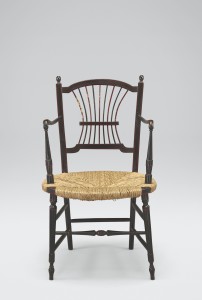 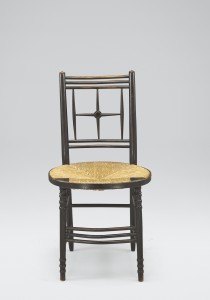 The most successful Morris & Co. designs, in terms of the numbers made and their broad public acceptance, were the chairs designed after vernacular prototypes (61–63). They were variations on a theme – comprising a light turned or hand-drawn frame, usually ebonised (painted or japanned), with a rush seat – and these continued in production well into the twentieth century. 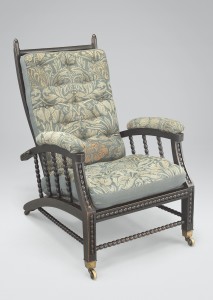 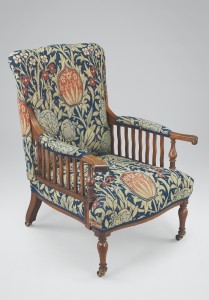 The adjustable armchair (64) designed by Phillip Webb, but based on a found
prototype, hinted at earlier styles. This armchair, often called a Morris chair, was to become an inspiration to a whole range of designers, including Austrian architect Josef Hoffmann (1870–1956) and Gustav Stickley (1858–1942), a leading figure of the American Arts and Crafts movement.
From 1885 many Morris & Co. products were designed by George Washington Henry Jack (1855–1931) (65). Jack trained as an architect in Scotland before moving to London, where in 1880 he joined the office of Webb. It was Webb who introduced Jack to Morris. Jack soon became a key figure in the Arts and Crafts movement as a member of the Art Workers’ Guild and the Arts and Crafts Exhibition Society. He also taught at the Royal
College of Art. He continued to work as an architect and designer up to and after the First World War (1914–18).