A Windsor chair is defined by its construction. The seat, usually a single thick board, forms the primary structural member, into which everything else – legs, arm supports and back–is fixed. It is an ancient method of seat construction, but only in Britain and its North American colonies did it achieve recognition as a fashionable and at times sophisticated form of seating. This selection of Windsors includes a full range of examples, from the most ‘primitive’ to the most sophisticated. 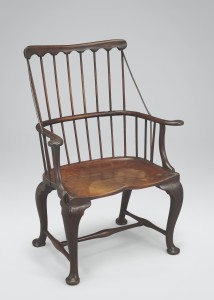 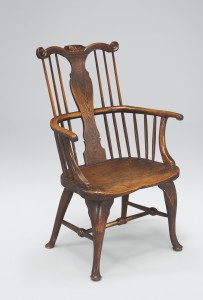 The earliest Windsor chairs were made for outside use – in parks, gardens and loggias – and were called Forest chairs for that reason (from the Latin word foris, which means ‘outdoors’). The best examples were first made in the Thames valley and shipped to London from the town of Windsor, which is how they acquired their name (44, 45). They were usually painted green, which was the standard finish for eighteenth-century Forest chairs. The materials varied: seats were almost invariably made of elm because of its resistance to splitting; other parts were beech, ash, cherry, yew and, even, walnut. The best Windsors were made entirely of yew, except for the elm seat, because this wood combined flexibility with great strength and durability. Windsor chairs were also used indoors, typically in the halls, galleries and, even, libraries of some aristocratic houses. By the late eighteenth century they had migrated down the social scale and could be found in meeting rooms, coffee houses and inns. The most sophisticated variant was the Gothic Windsor (49), while the Prince of Wales feathers chair (47) was among the most popular in the late eighteenth and early nineteenth centuries. 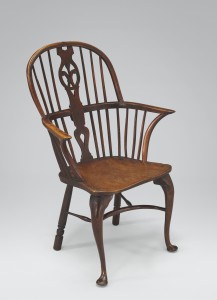 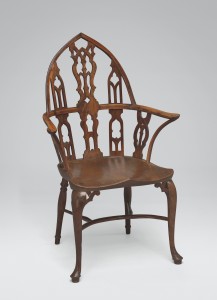 At the beginning of the nineteenth century the centre of Windsor chair production moved away from the Thames valley to High Wycombe. The reason for this change is not fully understood, but it coincided with a period of high agricultural unemployment, which meant that there was a large pool of redundant labour for Wycombe chair-makers upon which to draw. This, combined with the ready availability of timber in the surrounding woodland and easy access to the London market, allowed the Wycombe chair-makers to develop a new type of chair manufacture based on the mass production of components – including legs, stretchers and seats – by semi-skilled workers. Within a few decades, regional variations of the Wycombe system were developed all over Britain to satisfy the demands of an ever-growing and mainly urban population. 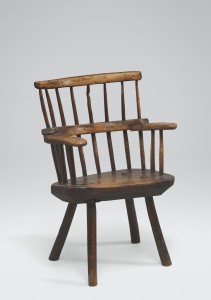 Alongside the development of the commercial Windsor chair was an entirely
independent and much older tradition of Windsor-type chairs, whose design and production had probably not changed in hundreds of years (46). These ‘primitive’ Windsors were made by unskilled or semi-skilled rural craftsmen in many parts of Britain, using simple tools and a minimum of working and shaping. These were the seats of farmers, husbandmen and the rural poor, and their survival is a testament to the fundamental strength of the design.