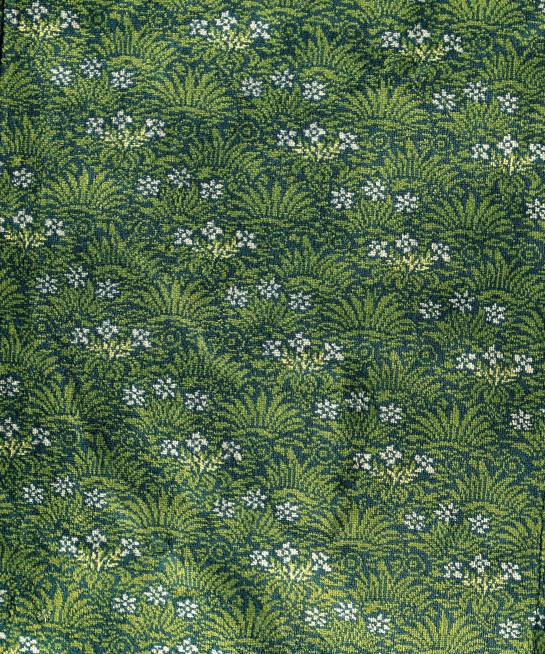 Carpet made from joined strips of Wilton machine-woven carpeting in wool, with jute weft

William Morris helped popularize machine-woven carpeting for the home. Before he began promoting it, such carpeting was used sparingly and only in areas of the house that were considered of secondary importance, such as corridors and bedrooms. It was sold in twenty-seven-inch-wide strips that were then seamed together to comprise the full room size and finished with a contrasting border. This carpet is made from five joined widths but no longer has its border. Morris’s source of inspiration for the design was a hanging seen in the fifteenth-century illuminated manuscript The Dance of the Wodehouses, from Froissart’s Chronicles; he had studied the manuscript at the British Museum as a young man. Morris continued to use daisy patterns throughout his career. This pattern was also available as three-ply Scotch or Kidderminster and Brussels (uncut pile) carpeting. Altogether Morris & Co. advertised twenty-four different Wilton carpet designs that were initially priced at seventy-four cents per yard. A footstool covered in Grass Brussels carpeting can be seen in the drawing room at Kelmscott Manor in Gloucestershire, Morris’s country home, and almost certainly dates from the time that the Morris family lived there. Linda Parry