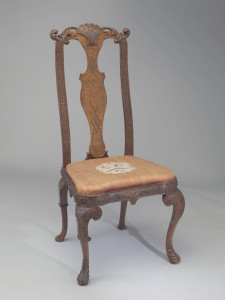 This is one of a pair of CTF chairs that were originally from a larger set of at least 12 chairs. The two in the CTF collection are marked with the numbers II and IV, and with the exception of numbers III and IX, all the others of the set are currently traceable.

Described as an ‘Indian Chair’ in the early eighteenth century trade card below, the design is notable for its slim elongated back – which from the side-view makes a sinuous curve. 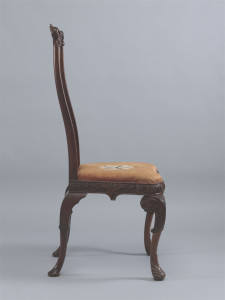 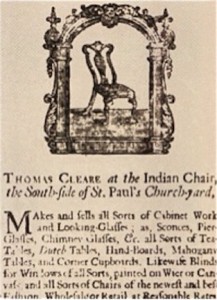 It was a form of chair much depicted in fashionable and aspirational interior paintings of the period: 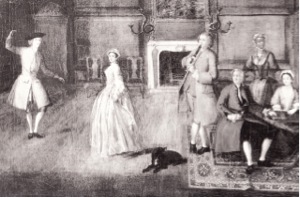 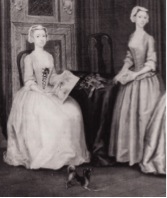 The chairs pictured below show other examples of this type: they are close in date to the CTF chairs and all have similar elongated curved backs, cabriole legs, also inlay and carving on the frames, large ornamented ears on the knees of the legs and decorative cut-outs in the splat or top rail.

The needlework seats of the two CTF ‘Indian’ chairs bear the crest of the Lyttleton family of Arley castle. When the Lyttletons sold Arley Castle and much of its contents in 1852, six chairs of this set were listed in the sale catalogue.

The Woodward family, who bought Arley Castle, bought these six chairs. Over one hundred years later, in the 1990s, the Woodwards sold four of the set, in two pairs. One of these pairs was the CTF pair. 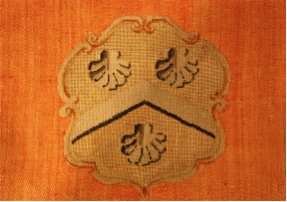 The three shells of the Lyttleton’s crest are prominently displayed in the bold needlework design of these seat covers, as they are in crest’s of the families which Lyttletons married. For instance, below are several examples of crests from the Lyttleton’s intermarriage with the Townsend family of Honnington Hall.

At the time these CTF ‘Indian’ chairs were made, the main branch of the Lyttletons lived in Old Hagley, see below.

The overmantle of Old Hagley used the three-shelled crest as its principal motif and when Old Hagley was demolished this overmantle was incorporated into one at Hagley Hall. 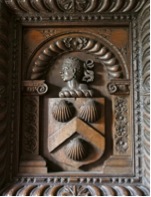 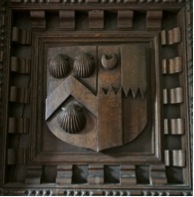 A portrait of the Seventeenth century John Lyttleton, also on display at Hagley Hall, shows this gentleman wearing the family crest in the form of tiny beaded shell buttons.