The Arms of Arundell 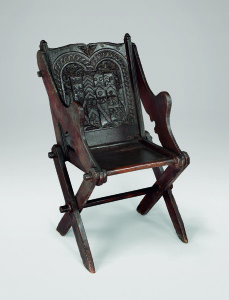 The back panel of this chair (sometimes referred to as a ‘Glastonbury chair’), bears the arms of the Arundell’s of Cornwall, the builders of Trerice, whose Cornish lineage can be traced back to the thirteenth century. 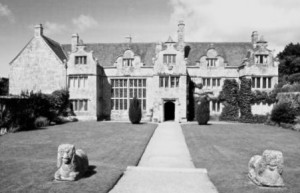 However, as furniture historian Victor Chinnery wrote, dating of furniture and ‘precise histories of ownership, even in the presence of a coat of arms’ are difficult things to decipher. Chinnery identified the arms on this chair as those of Sir John Arundell III (1495 – 1561), but was careful to explain that although the chair may have belonged to John Arundel III, it was just as likely to have been made on his death, or by one of his descendants, to commemorate his life. Therefore, the date that this chair was made could be anything from the middle years of the 1500s to the early 1600s.

John Arundell (also sometimes known as ‘Jack of Tilbury’) was a favourite of Henry VIII and served for a time as Henry’s Esquire of the body. Fittingly, this Arundell family chair currently resides in in a room of Tudor period panelling and is overlooked by a sixteenth century portrait of Henry VIII. 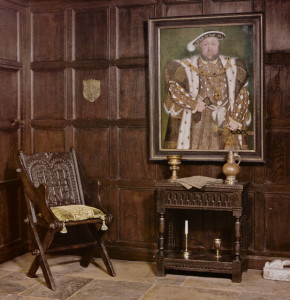 As a young man (in 1513) John Arundell was knighted at the Battle of the Spurs, when the cities of Tournai and Therouanne came into the hands of Henry VIII. John served as a commander of the English Royal Navy. In 1523 he captured the notorious Scottish pirate Duncan Campbell and was summoned to bring his prisoner to court, so that he might receive the personal thanks of the king for his ‘goodly and valiant enterprise’. After the death of Henry VIII, John retained his royal favour and was made Vice Admiral of the West by Edward VI. He held this position through the reign of Queen Mary, who once wrote to him to ensure that ‘the prince of Spain be honourably entertained should he chance to land in Cornwall’.

John twice served as High Sheriff of Cornwall and died in his 67th year, in 1561.

His tomb, in Stratton parish Church, is adorned with brass plates which depict John with his family – both of his wives, his three sons, and his nine daughters. Jack of Tilbury had lived through five consecutive reigns and served under four monarchs, impressively, he managed to stay in favour with all of them. By the end of his life John had amassed a considerable fortune and established a reputation for the family – still evident in the family seat, Trerice house in Cornwall, the interiors of which are also ornamented with the family’s arms.