Giles Grendey (1693–1780) was one of London’s best documented furniture-makers. He was born in Gloucestershire and at the age of sixteen was apprenticed to a prominent London joiner and
furniture-maker, William Sherborne. He became free of the Joiners’ Company in 1716. By 1726 he had established his own business and had taken his first apprentices. In 1729 he was elected to the Livery of the Joiners’ Company, to which he remained closely connected all his working life.

By 1731, if not before, Grendey had established a workshop and warehouse in St. John’s Square, Clerkenwell, and these remained his working premises until at least 1755. His dwelling house was nearby, at No 2 Lyon Street. Grendey remained active into the 1760s, becoming Master of the Joiners’ Company in 1766, but probably retiring shortly thereafter. In the 1770s, Grendey – now styled ‘gentleman’ – bought a country house at Palmer’s Green, a village a few miles outside London, complete with a coach house, stable and grounds. He died in March 1780, at the age of eighty-seven.
Grendey’s was a large business. When fire destroyed his premises in 1731 he was said by the London Daily Post, to have lost furniture to the value of £1,000 ‘pack’d for Exportation’, in addition to an easy chair worth 500 guineas. In August 1740, The London Evening Post described him as ‘a great Dealer in the Cabinet way’. Grendey was an importer and dealer in timber and had business dealings with some of London’s most eminent cabinet-makers, among them George III’s cabinet-maker, John Cobb (1710–1778), who married Grendey’s daughter, Sukey, in 1755. Grendey’s clients included several notable eighteenth-century figures, such as Sir Richard Colt Hoare (1758–1838) of Barn Elms and
Lord Scarsdale (1726 –1804) of Kedleston in Derbyshire. 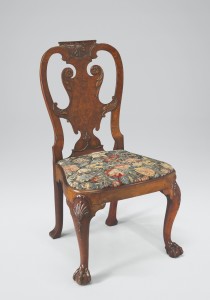 We know little of Grendey’s personality, but he was undoubtedly a sharp businessman and a difficult man when crossed. In 1726 one of his apprentices petitioned for a discharge from Grendey’s service on the grounds that he had been beaten. In court records the petitioner stated that Grendey ‘beat the pet[itioner] in a very barbarous manner, sometimes with a great stick and at other times knocking him downe and then kicking him in the face and other parts and in stead of learning him his trade as a Joyner sett him to sawing large timber which noe ways relates to the trade and hath likewise often threatened to be the death of the s[ai]d pet[itioner]’. 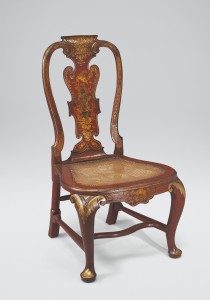 Grendey’s furniture is chiefly known not by documented commissions but by the large number of labelled pieces, mostly chairs, that survive (29). His workshop produced a number of different models, of which the veneered walnut and red japanned versions (30, 31) are the best known. Both were probably standard London models, of a type made by a number of different workshops, but Grendey’s are characterised not only by their labels but also by the presence of stamped initials on their frames. These are likely to be the workman’s initials and might indicate some form of subcontracting or piecework arrangement. Unlabelled chairs are often attributed to the Grendey workshop if these initials are present or if the chairs closely match labelled examples in construction and design (32). 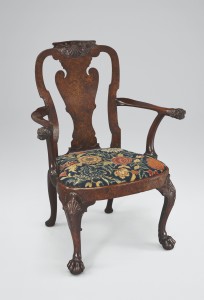