One of the most evident elements of nineteenth-century furniture design was a conscious evocation of the past. In the eighteenth century, antiquarianism was an intellectual novelty espoused by romantics and eccentrics such as Horace Walpole (1717–1797). His legacy in the next generation included the fabulously wealthy William Beckford (1760–1844) and the Scottish writer Sir Walter Scott (1771–1832). However, as the nineteenth century progressed, interest in the medieval and more recent past became a more mainstream pursuit. This self-conscious antiquarianism encompassed not only a fascination with pre-Reformation Gothic, but also a romantic fascination with Elizabethan, Jacobean, Carolean and, even, the William and Mary or Anglo-Dutch styles. Furniture made for this market included faithful copies, imaginative pastiches and deliberate fakes. 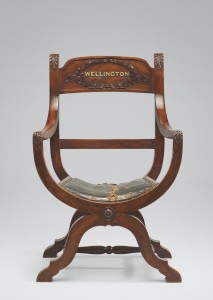 One vein of this historicism was the veneration of objects associated with great
national heroes or national events, and this is embodied in the chair made from the famous Waterloo elm in the form of a Roman sella curuli (50). This was a type of seat used by Roman high officials, so it was an appropriate model for a chair commemorating a great British hero, the Duke of Wellington (1769–1852). Similar mementoes, ranging in size from the merest trinkets to full-size furniture, were made in memory of Admiral Horatio Nelson (1758–1805), killed in the hour of his greatest triumph at the Battle of Trafalgar (1805). 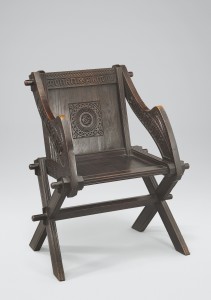 The monkish Glastonbury chair, based on a late medieval original said to have come from Glastonbury Abbey, was probably the most copied Gothic chair of the nineteenth century (52). Many examples, like the one shown here, were more or less faithful copies of the original, which became widely known after the publication of an engraving by Henry Shaw (1800–1873) in 1836. Other direct copies of old chairs, but perhaps somewhat different in their intent, are featured in this section. One of these (54) is a copy of a common model of eighteenth-century dressing chair, which by the nineteenth century had become used as a writing chair. The firm of Gillow & Co. made several variants of this design from the 1820s onwards in walnut, yew and rosewood. Another (53) is an English copy of an early eighteenth-century Dutch chair. This design survives in a variety of different versions, all inspired by the Dutch originals. In the aftermath of the Napoleonic Wars (1803-15) Europe was awash with the looted contents of aristocratic houses, royal palaces and ransacked monasteries, and these spoils found a ready market amongst British collectors. In correspondence, British furniture makers exploited this appetite, both with variations on a theme and exact reproductions of the original Dutch models. 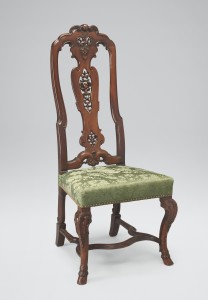 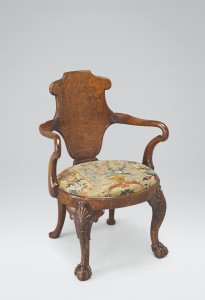 Among the foremost promoters of historicist design was the architect Edward Blore (1787–1879). He specialised in the restoration of historic buildings and in designing new buildings in an historic style. Unlike some of his contemporaries, Blore was not purely a Gothic revivalist. A chair was designed by Blore as part of the re-building and refurnishing of Lambeth Palace (the London residence of the Archbishop of Canterbury) from 1828 onwards (51). The design combines elements of English backstools of the late seventeenth century with hints of The Netherlands from the seventeenth century and of Walpole’s Elizabethan chairs at Strawberry Hill, and yet the result is purely nineteenth-century British. 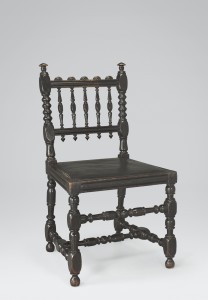