William Richard (W.R.) Lethaby (1857–1931) was a founding member of the Art Workers’ Guild in 1884, and in 1887 he and others founded the Arts and Crafts Exhibition Society as a showcase for contemporary designers and makers. Lethaby’s work often had a strong vernacular flavour (71), like that of his friend Ernest Gimson (1864–1919), with whom he jointly founded Kenton & Co. in 1890. This fertile yet short-lived venture was dissolved in 1892, but Lethaby remained committed to the Arts and Crafts cause, becoming a director of the Central School of Arts and Crafts in 1896. 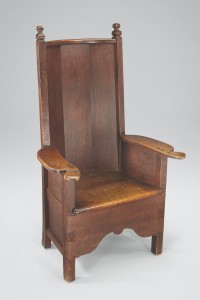 For Charles Robert (C.R.) Ashbee (1863–1942), craftsmanship was both the guarantor of quality and essential to the dignity of the craftsman (72, 73). His strong social conscience led him to found the Guild of Handicraft in the East End of London in 1888. In 1902 the Guild moved out of London to the Cotswold town of Chipping Campden, but Ashbee’s rural idyll soon failed in the face of commercial reality. He returned to London, a disillusioned man, in 1907. 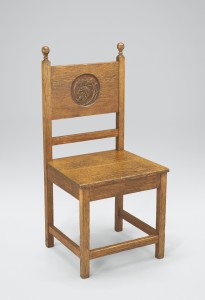 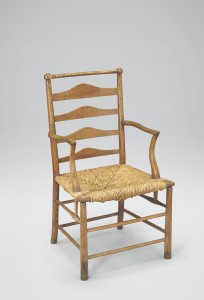 Gimson trained as an architect before joining Lethaby and other like-minded designers to set up Kenton & Co., a furniture workshop in which trained cabinet-makers produced furniture based on the architects’ designs. After Kenton & Co. was disbanded in 1892, Gimson left London for Gloucestershire to establish a partnership with the architect Ernest Barnsley (1863–1926). He eventually settled at Sapperton in 1902. Gimson, who had begun by making furniture himself, quickly reverted to designing, leaving the making to experienced furniture-makers. 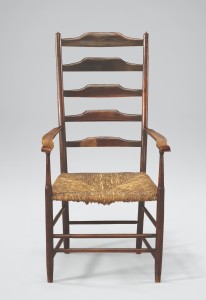 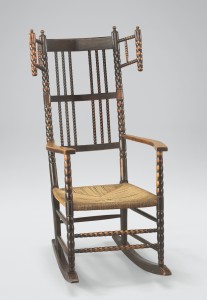 Gimson was inspired by traditional furniture made by rural craftsmen; one of his most popular designs, the ladder-back chair (76), was based on the work of Philip Clissett (1817– 1913), a Herefordshire chair-maker. Another vernacular variant was the ball-turned chair, of which Gimson produced several designs derived from chairs made in the north-west of England (78). The lattice-back chair was a Gimson original (79), however, and has been much copied since. This deceptively simple design requires a high level of skill to execute successfully, and the combination of simplicity and sophistication is one of the most striking characteristics of Gimson’s work. 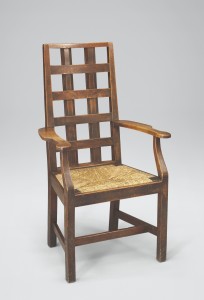 Gimson’s legacy was extraordinary. He laid the foundations of the Cotswold School of furniture design, and his work influenced a new generation of successful British furniture designers, including Ambrose Heal (1872–1959) and Gordon Russell (1892–1980), whose workshops were first established at nearby Broadway, in Worcestershire (77). 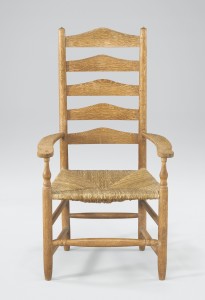 Mackay Hugh (M.H.) Baillie Scott (1865–1945) is often considered an Art Nouveau designer, but most of his work falls within the British Arts and Crafts tradition. He trained as an architect, establishing a practice on the Isle of Man in 1889. There he collaborated with Archibald Knox (1864–1933) in designing furnishings for a number of houses on the island.

Shortly after 1900 Baillie Scott left the Isle of Man and settled in Bedford to work for the Bedford furniture manufacturer J.P. White (1855–1917). White’s 1901 catalogue included about 120 pieces designed by Baillie Scott and made at White’s Pyghtle Works (75). The furniture was sold through Liberty’s and at White’s London showrooms in New Bond Street. 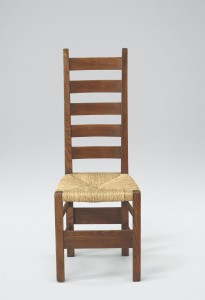 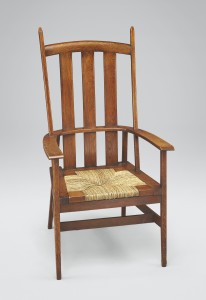 Richard Barry Parker (1867–1947) was a successful architect and designer with an extensive practice in the northwest of England. Whirriestone, a house in Rochdale, Lancashire, was one of his best-known private commissions (80).