The Arms of Matthew Martin 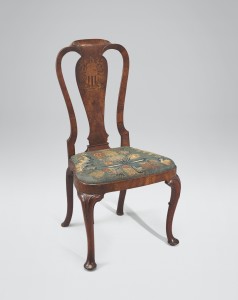 The arms that decorate the splat of this early eighteenth-century chair were awarded, in 1722, to Captain Matthew Martin (b.1676 d.1749), of Wivenhoe, Essex. 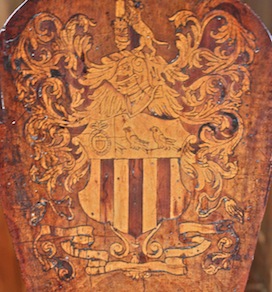 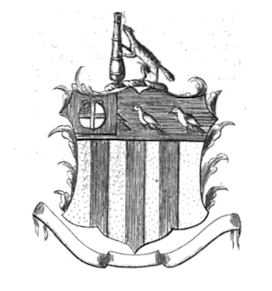 Before the award of these arms, Captain Matthew Martin commanded a ship called the Marlborough for the East India Company. On 30th November 1711, two years before the end of ‘Queen Anne’s War’ (1702-1713), Martin set off for the East Indies and year later (late 1712) was attacked by three French ships of war. Martin fought them off (an event much lauded by contemporary commentators) and brought his ship and cargo worth £200,000 safely into Fort St. George, India.

His cunning stagey for escape from the war ships had been to cast adrift a cask in the dark with a lit lantern attached to it. The enemy had duly followed the cask in the false belief that they were in pursuit of the Marlborough, while Captain Martin made his escape in the opposite direction. For his success and service, the East India Company rewarded Martin ‘£1000 and a gold medal set round with 24 large diamonds’. The medal was an oval of gold with the Arms of the East India Company on it.

Some previous accounts of Captain Martin’s triumph have connected the much later 1722 award of a patent for arms with his brave adventures at sea, however, there was no such connection. The award of arms was the result of a private application made by Captain Martin in 1722. Royal College of Arms records show that Martin believed himself to be descended from the Family of ‘Martin of Saffron Walden’ in Essex, whose Arms had ‘three pallets Azure’ and ‘as many Martlets’. But without a proper history of his decent, Martin was not able substantiate his claim.

In such cases, the Kings of Arms were sometimes prepared to make a grant of new arms based on the old design, so in this instance, the tinctures of the arms were changed. Whereas the ancient family of Martin had three martlets (small birds) across the top of their shield, for Captain Matthew Martin’s new arms an image of the medal he was awarded by the East India was superimposed over one of the marlets. All three martlets of the original Martin arms remain in Captain Martin’s new arms, but the far left-hand bird is mostly covered by the medal so that only its tail peeps out – in a kind of three dimensional layered effect. 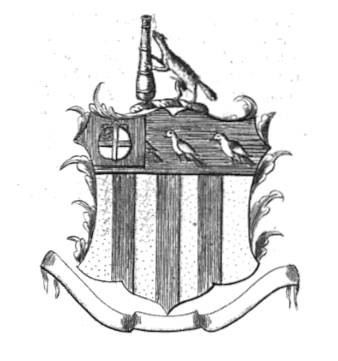 Martin paid the usual fee for these arms and they were officially granted by patent of John Anstis, Garter King of Arms, and John Vanbrugh, Clarenceux King of Arms, on 18 September 1722.

There is evidence that before 1722 Matthew Martin used the older crest of the Martin family, to which he had no official entitlement.

In common with many East India Company sea captains and other Company servants, Martin commissioned armorial porcelain to be made in China during his travels. The plate below, now in the British Museum, is one of the set commissioned by Captain Martin which displays the older crest – three martlets, without a medal partially covering one of them, sit along the top of each striped shield. 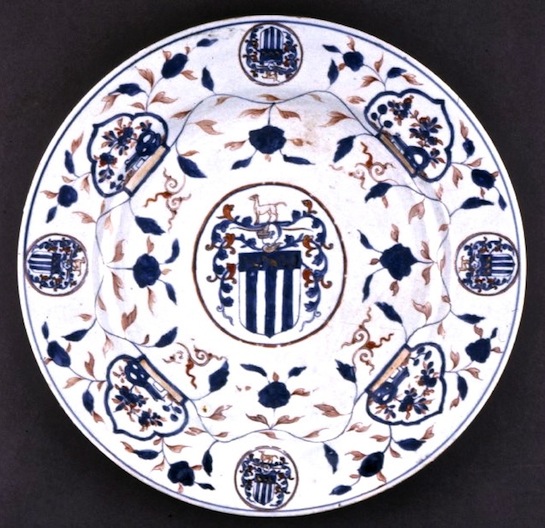 As well as having his new coat of arms officiated in 1722, around this time Captain Martin also had his portrait painted – the diamond studded medal he was awarded can be seen to the left by his right hand. 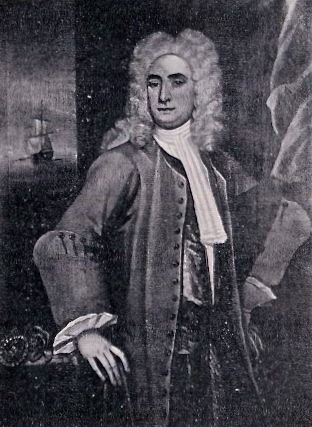 He had also taken possession of the family home Wivenhoe Mansion in Essex, pictured below (now demolished, most probably in the nineteenth century).

Around this time he also purchased Arlesford Hall, also in Essex (pictured below). 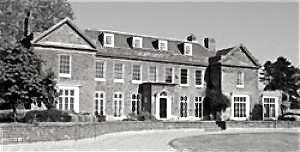 Furthermore, he had become heavily involved in the parliamentary and municipal matters of Essex. He was one of the Deputy-Lieutenants and a Justice of the Peace for the County. In 1721-22 he was elected to represent the borough of Colchester in Parliament. He represented Colchester for the second time 1734-35 and he held the ancient and honorable office of High Steward of Colchester. On October 4th, 1726, he was elected Mayor of the borough.

Adam Bowett has put the construction date of these CTF chairs as 1725 to 1740 – the period in which Captain Martin was most busy in Essex: buying and renovating property and getting heavily involved in county government.

It seems, perhaps in loyalty to this county, that Martin may also have had his chairs made in Essex, rather than commission them from a London maker.

The clue for this possibility is a quirk in the construction that marks these chairs out clearly from others of this type: the side rails are joined to the top rail, a bit crudely, by a lapped joint – see photograph below.

While this method of construction was perfectly serviceable as a work of joinery, it is an unusual solution when compared to other London-made chairs of this period – which are almost, without fail, constructed with a mortice and tenon joint at this juncture. According to Bowett, the lapped joint hints at a possible provincial manufacture. However, when it came to advertising his lineage on the splat of these chairs Captain Martin did not stint – with inlay that was fine and elaborate, of the highest quality for its time. 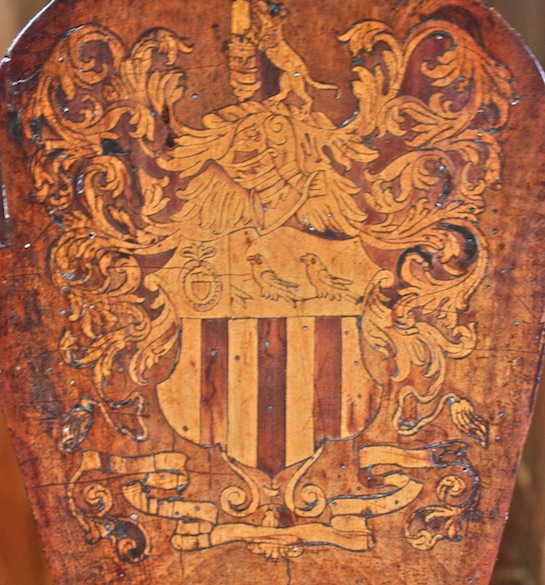